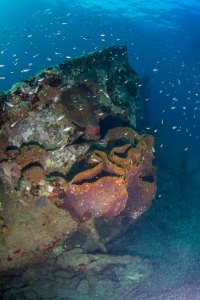 The Coolie Ship was the AKA given to the SV Volga, a three mast British flagged vessel that hit a reef and sank on the port side of the Castries Harbour on the 10th December 1893.  This was three years after the vessel was commissioned. The Volga collected indentured laborers from Calcutta, India.  Their first stop was to be St. Lucia and then onward to Jamaica where the majority of the Indians were intended to have disembarked.

The accident report stated that the captain anchored the vessel and did not take due care of his vessels position, while at anchor the vessel with the changing wind, swung onto the rocks creating a large hole on the port side of the ship and it sank. There were no casualties of this incident. The captain temporarily lost his license for this incident.

Most of the St. Lucians of East Indian heritage had a grand or great grand parent that was aboard this vessel. Before this incident the island of St. Lucia was occupied mainly by the white plantation owners, managers, soldiers, bookkeepers and their families or families of freed slaves of African decent. The indentured laborers aboard the Volga were intended to become skilled or semi skilled laborers providing services that the descendants and freed slaves did not provide or where there was a greater demand for this service.

The vessel lays on the northern side of the Castries Harbour for many decades before it wad deliberately sank by the British by placing explosives aboard blowing up the vessel that had become “an hindrance to navigation”, this submerged the entire vessel.

This vessel is a not often visited dive site in the north of the island. Few dive shops take their divers there. Bone Yard is the most popular name given to this dive site as there is also the remnant of what appears to be an airplane at the stern of the vessel.

These photos were taken by Rick Nunn, a diver who have been visiting St. Lucia for over 15 years as a diver, sometime twice yearly. This was his first dive on the Volga, an early morning visit before his daily two tank dive.

Executive Director at Dive Industry Association. Board Member at Dive Industry Foundation. Marketing Consultant to the Diving Industry. I have been a certified Scuba Diver since I was 15 years old and have been a passionate waterman for as long as I can remember.
View all posts by Gene Muchanski →
This entry was posted in Press Release. Bookmark the permalink.